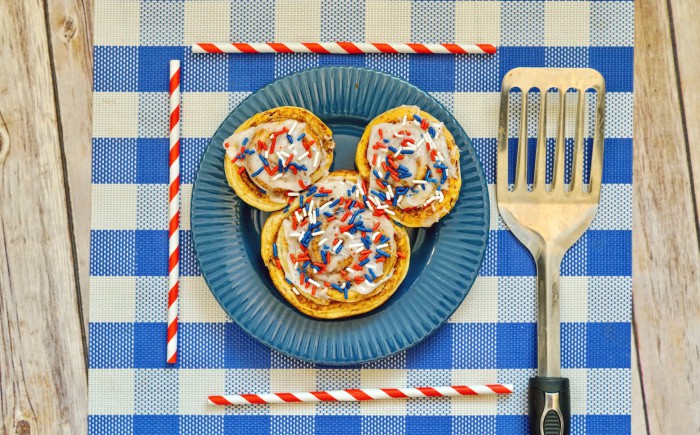 Do you enjoy making festive food, desserts, or fun treats for your kids? These fun Patriotic Mickey Mouse Cinnamon Rolls would be a hit for Memorial Day, 4th of July, and Labor Day. I’m a fan of Disney and so are my kids so I knew these would be a hit. I’ll warn you now that you will likely need to make more than one batch because they go quickly.

Don’t worry you won’t need to pull out your fancy mixer or baking gear to make these fun treats. So next time you are at the grocery store grab a minimum of 2 regular packages of cinnamon rolls. The two packages will make two of these Cinnamon Rolls, so you will have to adjust the recipe accordingly.

My kids always enjoy it when I make them festive treats around the holidays or just because. They loved it when I woke them up on Saturday and served them these Patriotic Mickey Mouse Cinnamon Rolls. There are several patriotic holidays during the summer months too. Between Memorial Day, 4th of July, and Labor Day, you have several options on serving your kids these Red, White, and Blue Cinnamon Rolls.

Check out our Patriotic Chocolate Covered Strawberries too!

Have you ever tried making Patriotic Mickey Mouse Cinnamon Rolls? Do you think your kids would love them?