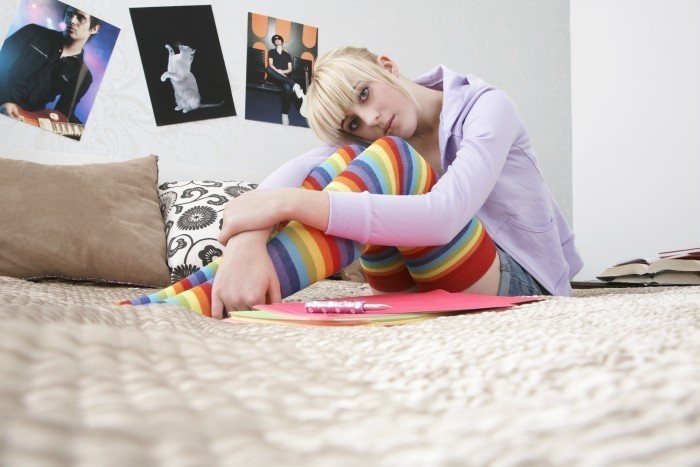 Do you think that your teenager may be depressed? Depression can happen to anyone and most people who are suffering are doing so in silence including your teenager. While it may be difficult to distinguish between your teenagers pushing back on the boundaries that you have set or depression, but there are things that you can look for so that you can intervene and get them help. There are dangers if you leave untreated teenage depression and force your child to just deal with it.

Chances are if you ask your teenager if they are depressed, don’t be surprised when they say “no”. They are more than likely in denial that they are suffering from depression and that they aren’t just sad. Unlike sadness, major depression in teenagers will affect every part of their life and unlike most other illnesses, severe mental illnesses aren’t going to go away on there own.

Disclosure: Please contact your health care provider or go to the nearest emergency room if you are struggling with untreated teenage depression and need help.

Even though you may experience depression from time to time, teenagers who suffer from a major depressive disorder will continue to exhibit ongoing symptoms for two weeks or longer. It isn’t uncommon for teenagers or even us parents, often don’t realize that they have signs and symptoms of clinical depression until someone else points it up. It’s usually another family member or friend points who notices a change in behavior. But chances are a teacher will be the one to point it out. While other times, a major problem, such as ditching school, will happen before you realize that your teenager may have a problem with major depressive disorder.

Here are the common signs and symptoms of depression:

As a parent, you should never tell your teenager to suck it up or snap out of it. This can be very harmful to their emotional and mental well-being. Major depression in teenagers is real and it should be treated just like you would if they were sick.

Your teenager’s symptoms can range from mild to severe but they should never be ignored. Schedule an appointment with a licensed counselor, psychologist, or psychiatrist to help them get started on the proper treatment plan to help improve teenage depression. Keep in mind that untreated teenage depression is potentially dangerous to their mental health. An overwhelmed, a teenager will often have an accident or attempt suicide before they ask for help. Parents, it is better to watch for the signs and symptoms of teenage depression than to let it go untreated.

Untreated depression in teenagers can manifest them engaging in risky behaviors as a cry for help. If you notice any of these behaviors, it is best to focus on ways to help your teen deal with their depression. Here is a list of risky behavior that you might see your teen do if they have untreated teenage depression:

Teenagers often have weird sleeping habits to do their busy schedules. Not only that we all struggle with insomnia or feeling so tired that you feel like you could use a few extra hours of sleep. Keep in mind that all sleep disorders aren’t caused by untreated teenage depression. But there is a direct link between depression and sleeping disorders. Teenagers often do need a bit more sleep than an adult but sleeping too much or not getting enough, causes their body to function improperly.

If you suspect that your teenager has a sleep disorder or untreated teenage depression, it is best to get them help from their primary care doctor or a licensed mental health professional, such as a counselor. Some sleep disorders can be caused by other health problems besides untreated teenage depression. Treatment can range from medication, changes in your teenager’s diet, exercise, stop or reduce caffeine intake, keep a routine sleep schedule, counseling or a combination of these methods.

Untreated Teenage Depression Can Cause Abnormalities in the Brain

As I’ve mentioned above, untreated teenage depression can start changing behaviors and thinking. But researchers are also concerned that there are cognitive changes that take place in the brain too. Researches have compared MRI’s on patients who didn’t exhibit signs and symptoms of depression vs people who had clinical signs and symptoms of major depressive disorder. They noticed that there was brain shrinkage in patients who had clinical depression. The MRI revealed that depression affects the hippocampus, anterior cingulate, and prefrontal cortex.

Untreated teenage depression can cause brain abnormalities to manifest into bigger problems if it is left untreated. Ignoring depression can lead to neurological disorders such as Alzheimer’s, epilepsy, multiple sclerosis, amnesia, schizophrenia, obsessive-compulsive disorders, ADHD, autism, memory issues, and dementia.  Medication and therapy can help restore the chemicals in your brain and help reduce the chances of developing any of the mentioned neurological disorders.

Does Your Teenager Seem Angry All the Time?

Teens are naturally moody but if you begin to notice significant changes in their behavior, their frequent grumpiness, anger problems, or constantly being moody can be an underlying symptom of untreated teenage depression. You should seek advice from your teen’s doctor, health care provider, or a mental health professional for an evaluation. They are trained to be able to tell the difference between a bad day or untreated teenage depression.

Next time you see your teenager’s temper, try to keep your cool even if you have to count from 1 to 100 before saying something you might regret later. Your teen may even say things that they don’t really mean. But it is important that you focus on teaching them healthy ways to cope with their anger before they become out of control.

Untreated teenage depression can lead to frequent absences from school. Most of the time teenagers with depression often time have trouble sleeping due to insomnia. Insomnia can cause them to oversleep, miss getting to school on time, or even stay home the entire day to sleep. As you can probably see, this can lead to an ongoing cycle. Please seek help for your teenager before your teenager’s school absences result in truancy or being held back.

It is true that depressed teenagers often have trouble concentrating, making decisions, and completing tasks at school. Unusual work performance issues can stem from several underlying issues including anxiety and depression. If you notice that your teenager’s grades are starting to suffer and they have had some behavioral changes too, chances are your teenager may have a major depressive disorder. Please seek immediate help from a mental health care professional.

Most teenagers with untreated teenage depression oftentimes will start talking about self-harm or even suicide. They often use talking about it as a cry for help or attention even though they aren’t really planning on following through.

However, do keep in mind that a teenager may cut, burn, or do some other form of self-harming themselves. So watch for those signs so that you can get them immediate help. Self-harm is usually done for the adrenaline rush rather than following through with a suicide threat. Emotional pain or problems can be difficult to work through for teenagers and adults alike so they use self-harm as a means to attempt to remove their emotional pain or to solve an emotional problem.

Often times the person who is considering suicide, will often start making comments about being better off dead because they see it as the only way out of their problems. You might begin to see your teenager making preparations to end their life ie getting a gun, experiment with drugs, give away their prized possessions. If someone confides in you about their plans, please listen to them and seek help from a trained professional. Never brush off their threats even if you don’t think they are serious.

Did you realize that untreated teenage depression had so many health consequences?