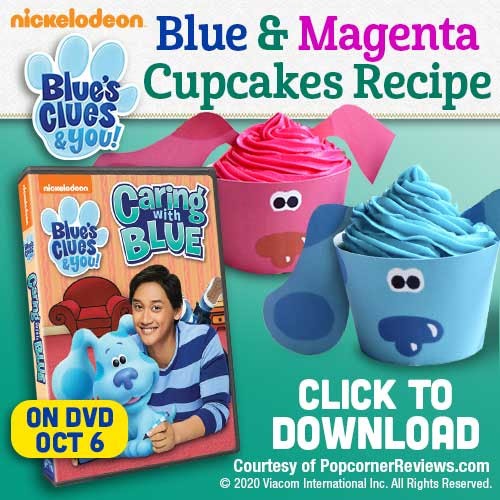 Are you looking for some Blue’s Clues birthday party ideas? Do you have a Blue’s Clues fan with a birthday coming up? Whether your favorite Blue’s Clues character is Magenta or Blue, you can make your child’s birthday to remember for years to come. We have the perfect Magenta and Blue cupcakes to serve your guests or make these just for fun.

Grab a Copy of Blues Clues: Caring with Blue DVD

Blue Clues just released a new DVD featuring “Caring with Blue” and it would be a great way to kick off the party. Running the DVD as you are waiting for guests to arrive can help keep the kids occupied while you finish up the last minute preparations.

Capture your child and their friends with a Blue’s Clues photo booth. A DIY photo booth is an easy and inexpensive way to share fun memories of your child’s birthday party. Search for the perfect photo backdrop, silly Blue’s clues props, and designate a friend to help capture everyone’s photo. Always ask parents before sharing a child’s photo on social media.

Pro tip: Get a tripod to make capturing photos a breeze.

These cute Magenta and Blues cupcakes will be a hit during your child’s birthday party. Making homemade buttercream icing is easy to make and it takes so much better than the store-bought icing kits. Grab the recipe, printable Magenta and Blue character cupcake wrappers, and directions below.

Check Out the New Blue’s Clues & You DVD: Caring With Blue

LEARN ABOUT EMOTIONS WITH BELOVED PUPPY BLUE IN THE ALL-NEW DVD
BLUE’S CLUES & YOU! CARING WITH BLUE

Nickelodeon’s hit interactive preschool series is back on DVD with Blue’s Clues & You! Caring with Blue. Available Oct. 6, fans can join beloved puppy Blue and live-action host Josh (Josh Dela Cruz) as they play Blue’s Clues to find the best way to help Blue and her friends deal with different feelings.

In the Blue’s Clues & You! Caring with Blue DVD, Blue and her friends play Blue’s Clues to learn about all kinds of emotions–-Josh is feeling silly, Magenta is so excited to get new glasses and Blue is feeling a bit sad. The DVD will also include special episodes from Josh & Blue’s VLOG and eight American Sign Language flash cards featuring Josh and words from the show. Blue’s Clues & You! Caring with Blue will be available from Nickelodeon Home Entertainment and Paramount Home Entertainment on October 6, 2020, for the suggested retail price of $10.99 U.S.

Buy Blue Clue’s and You: Caring with Blue DVD Now.

Do you think your child would enjoy these Blue’s Clues Magenta and Blue cupcakes?