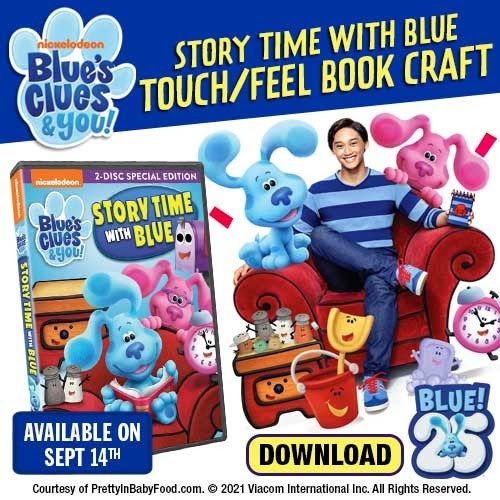 Blue’s Clues has been a family favorite since my daughter was little. My daughter would have been thrilled to make the Interactive Blue’s Clues Book. She enjoyed it because this is one of the few shows that incorporated sign language into their programming. My daughter was born with a severe to profound hearing loss in both ears. Thankfully, she was able to get cochlear implants so that she could hear spoken language.

Did you know Blue’s Clues is celebrating its 25th birthday this year? It doesn’t seem that long ago but my daughter will be 25 in December. Every afternoon I would turn on the television for her and she would come running so that she could watch Steve and Blue.

Has your child ever read a book and wish that they could interact with it? You are in luck! Today, I wanted to share this fun Blue’s Clues Touch and Feel Book.nk

FOR THE FIRST TIME EVER, ENJOY EPISODES FROM BLUE’S CLUES & YOU!
AND THE ORIGINAL SERIES TOGETHER IN A 2-DISC SPECIAL EDITION DVD

Get ready to celebrate 25 years of Blue’s Clues with the special 2-disc DVD release of Blue’s Clues & You! Story Time with Blue! Available on September 14, 2021, this DVD is full of fun stories from Blue and her friends as they use their imagination, attend a pajama party, and discover Blue’s favorite part of bedtime. Also featuring a bonus disc with eight episodes from the original series, Blue’s Clues & You! Story Time with Blue will capture the hearts of both new and nostalgic fans of all ages!

Disc One – Blue’s Clues & You! Story Time with Blue:

This special 2-DVD set also includes Blue’s Biggest Stories in celebration of the 25th anniversary of Blue’s Clues! Steve and Joe join Blue and all of her friends for more stories!

How long has Blue’s Clue been a family favorite? Do you think your kids will enjoy this fun interactive Blue’s Clues touch and feel book?