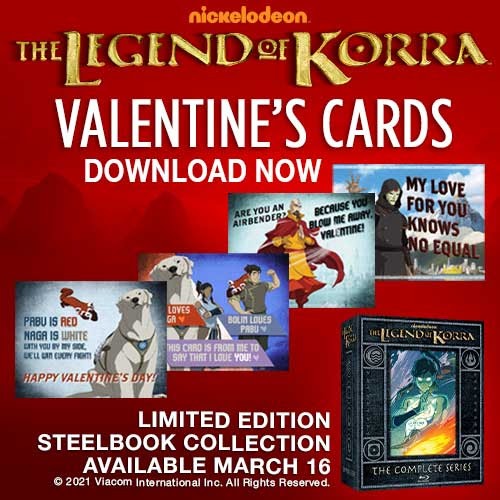 Do you like Korra? Print out these free Korra Valentine’s Day Cards. Valentine’s day is just around the corner and due to COVID school parties will look different for the kids. Our school has told us to forgo sending food, drinks, candy, pencils, trinkets, or anything else. They can only bring their classmates Valentine’s day cards only. Students are making Valentine’s day boxes and will exchange their cards.

Team Avatar is here to save Valentine’s Day. In anticipation of The Legend of Korra – The Complete Series Limited Edition Steelbook Collection in March, we are excited to share these Free Printable Korra Valentine’s Day Cards.

Nickelodeon’scritically acclaimed, Emmy® Award-winning The Legend of Korra animated series receives the SteelBook® treatment as The Legend of Korra – The Complete Series Limited Edition Steelbook Collection arrives on March 16, 2021. The 4-book collection features stunning new artwork by artist Caleb Thomas, with each book featuring a different element (Fire, Water, Earth, and Air). The front covers combine to showcase Korra’s physical journey to become the Avatar, while the back covers represent pivotal moments in her spiritual journey. Thomas also designed the covers of the Avatar: The Last Airbender SteelBook® and was handpicked to design both collections’ covers after series co-creator and executive producer Bryan Konietzko became a fan of Thomas’ art style on social media. The collection’s production run will be limited to 10,000 units.

Synopsis:
The spirit of the Avatar lives on in the complete series of The Legend of Korra. Relive every moment from all four books. From meeting Avatar Korra, a teenage girl from the Southern Water Tribe, in Book One, to opening the spirit portal and entering a new age where spirits and mankind coexist in Books Two and Three, to embarking on a journey of self-discovery and restoring balance to the Earth Kingdom in Book Four, fans won’t want to miss a second of air, earth, water and firebending in this complete collection!

Are you ready for Valentine’s Day? Still, needing cards for your child’s classmates? Download these Free Printable Valentine’s Day Cards The Legend of Korra.