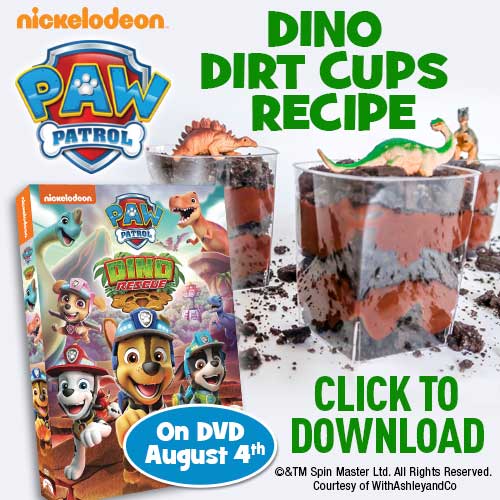 Do you think your kids will enjoy these Paw Patrol Dino Dirt Cups? Do your kids love eating fun snacks while watching their favorite Paw Patrol episodes? Dirt cups are always a huge hit in our house and I am sure that your child would love them too.

JOIN THE PAW PATROL PUPS AND THEIR NEW PREHISTORIC PALS IN THIS DINO-MITE DVD RELEASE, INCLUDING TWO DOUBLE MISSIONS!

Get ready for roars and rescues with the PAW Patrol in the brand-new DVD PAW Patrol: Dino Rescue. Featuring episodes from the hit Nickelodeon series PAW Patrol (produced by Spin Master Entertainment), the new DVD release lets fans join the pups as they travel to the Dino Wilds with all-new rescue gear and heavy-duty vehicles for action-packed adventures, where they’ll meet new prehistoric pals including new pup and dinosaur expert Rex, work together to stop a dinosaur egg thief and more. The PAW Patrol: Dino Rescue DVD will be available from Paramount Home Entertainment and Nickelodeon Home Entertainment. Buy now from Amazon.

Do you have a Paw Patrol Fan? Do you think they will love the Dino Dirt Cups?