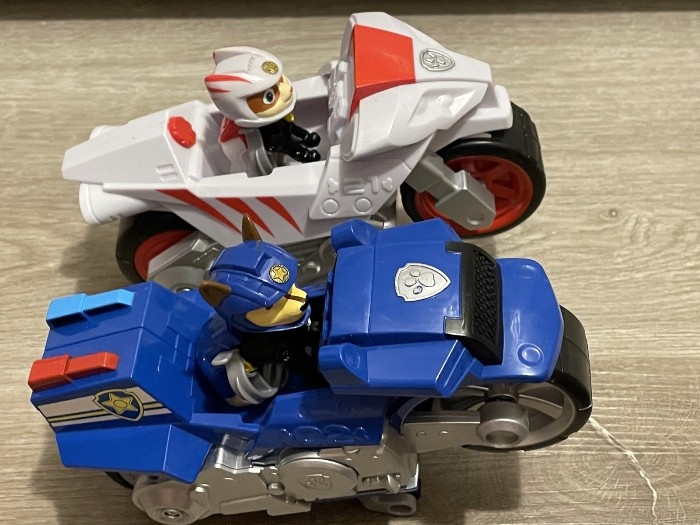 Paw Patrol fans are you ready for some more action. Check out the Paw Patrol Moto Pups gift ideas. If you are obsessed with Paw Patrol, you won’t be disappointed with their new adventure! Chase and his crew have done it again and are debuting the newest member of the crew. Meet Wild Kat in the new DVD from PAW Patrol: Moto Pups!  The crew has all-new high-speed bikes and high-tech gear featured in the new hit preschool series Paw Patrol. The pups are in for a wild ride as they stop the Ruff-Ruff Pack from trashing the town, wrangle giant runaway donuts, and even gear up for an epic rescue of one of their own – Chase!

Christmas will be here before you know it and we wanted to share these fun Paw Patrol Gift Ideas with you. My son just turned 10 and hasn’t been interested in Paw Patrol in several years. But when I pulled out these fun Paw Patrol toys, he said, “these are so cool, why didn’t they have these when I was younger”.

Get your Paw Patrol fan outside and ride this fun three-wheel Paw Patrol scooter. It is made for ages 2 and up and under 45 lbs. The large urethane wheels provide a smooth ride. The wheels even light up for added fun. It does require assembly and comes with the required tools needed to put it together. Buy the Paw Patrol 3 Wheeled Scooter here (aff link).

Your child must have a snug-fitting helmet to wear before they are allowed to ride a scooter, tricycle, or bicycle. The helmet will protect them in case of an accident or fall. You can make your own Wild Cat or Chase DIY bike helmet. Or find another fun Paw Patrol helmet (aff link) for them to wear while riding their scooter or tricycle.

The Chase and Wild Cat motorcycles were a hit with my son. He loved the wheelie feature and enjoyed racing these two down my hallway. To activate the wheelie feature, you simply have to gently press down on the motorcycle and pull it back. Then let go and it will pop a wheelie as it speeding on to the next adventure. You can purchase Chase (aff link) and Wild Cat (aff link) along with several other friends from Paw Patrol Moto Pups.

The PAW Patrol pack is back in the brand-new DVD release PAW Patrol: Moto Pups! Available on June 1, 2021, this DVD features the newest member of the PAW Patrol, Wild Cat, and all-new high-speed bikes and high-tech gear from the hit preschool series PAW Patrol, airing on Nickelodeon and produced by Spin Master Entertainment. The beloved pups are in for a wild ride as they stop the Ruff-Ruff Pack from trashing the town, wrangle giant runaway donuts and even gear up for an epic rescue of one of their own—Chase!

PAW Patrol: Moto Pups synopsis:The pack is back! The Motorcycle Stunt Show comes to town bringing famed stunt cyclist Wild Cat and the troublemaking Ruff-Ruff Pack with it. Wild Cat joins the PAW Patrol to help stop the baddies from trashing the town. Then, the Moto Pups use their tastiest tricks to wrangle giant runaway donuts, save Mayor Goodway and even rescue one of their own—Chase!

The Paw Patrol is at again and has new exciting episodes featured on the Moto Pups DVD. My youngest was a huge fan of Paw Patrol when he was younger. At first, he didn’t want to help me unbox these fun Paw Patrol Moto Pups gift ideas. We got everything unboxed and put together so that I share these fun toys with you.