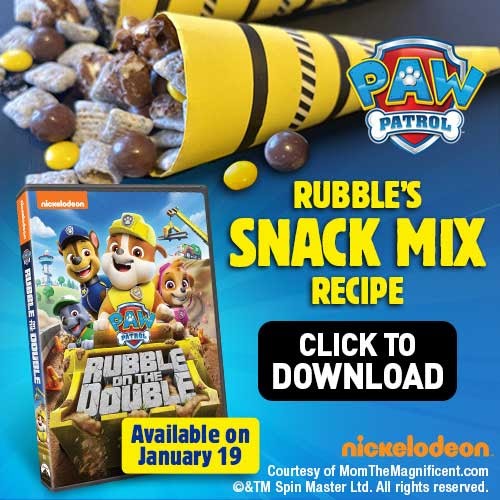 Is it still too cold to go outside and let the kids get fresh air or play? The weather in TX is quite strange and temperatures fluctuate constantly. This year with COVID still on the rise, we haven’t really gone anywhere. My son has gotten stir crazy a bit so I’ve had to find new ideas to help keep him occupied when he isn’t at school. We usually end up watching several movies on Netflix or DVD that my son picked out. Yesterday afternoon, he put Paw Patrol: Rubble on the Double into the DVD player while I was making him a fun snack mix. We think your little ones will love digging into this tasty Rubble’s Snack Mix recipe!

Click here to download the instructions on how to make Rubble’s Snack Mix and Yellow Serving Cones.

About Paw Patrol: Rubble on the Double

PAW PATROL®:
RUBBLE ON THE DOUBLE

Get ready to raise the “woof” with Rubble and the rest of the pups in the all-new DVD release, PAW Patrol: Rubble on the Double. Available on January 19, 2021, and featuring nine construction-themed episodes from Nickelodeon’s hit preschool series PAW Patrol (produced by Spin Master Entertainment), the DVD will shine a spotlight on fan-favorite pup Rubble and will even include a flashback of how he became a member of the PAW Patrol. Fans can join the pups for adventures filled with tons of digging, building and fixing, as the PAW Patrol work together to save animals, superheroes, a rock-and-roll show and more. PAW Patrol: Rubble on the Double is now available on DVD from Paramount Home Entertainment and Nickelodeon Home Entertainment. You can purchase it here on Amazon.

PAW Patrol: Rubble on the Doublesynopsis:
Get ready to raise the “woof” with Rubble and the rest of the PAW Patrol in these nine construction missions! Whether they’re rescuing animals, superheroes, or even a rock-and-roll show, the pups can always build a plan to save the day! Can you dig it?

Do you plan on making Rubble’s Snack Mix and watching Paw Patrol Rubble on the Double with your child?