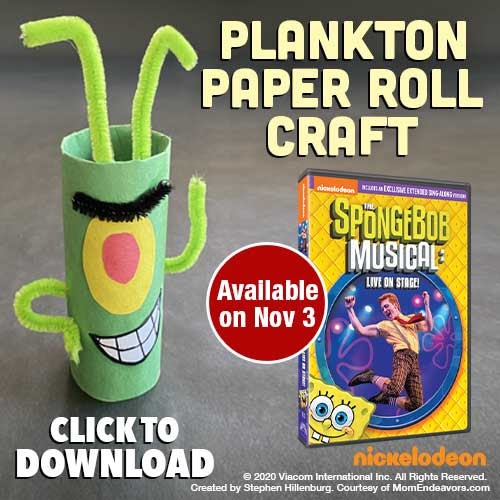 How to make Plankton Paper Roll Craft? He lives under the sea with Spongebob Squarepants and friends.

Who lives in a pineapple under the sea? Spongebob Squarepants. It is hard to believe this cartoon has been on aired its first episode on May 1st, 1999. The cartoon is still popular today and you can find the newly released Spongebob Squarepants Live on Stage DVD now. Spongebob is loved by many and it is the longest running series on Nickelodeon.

You can’t forget about all of the other characters that appear in the show with Spongebob Squarepants. But my favorite sidekick on the show is Plankton. He is the owner of the Chum Bucket restaurant alongside Karen, a waterproof computer, also known as his wife and partner. Plankton is a bit jealous of Mr. Krabs successful restaurant known as the Bikini Bottom. You can find Plankton nosing around in Mr. Krabs restaurant, looking to steal his secret recipe for making Krabby Patties. Even though Karen gives Plankton ideas on how to steal the secret formula, their efforts always come up empty handed.

Mr. Krabs’s arch-nemesis Plankton has returned, cleverly disguised as a paper roll craft! In celebration of the release of The SpongeBob Musical: Live on Stage! now available on DVD, we’re delighted to share instructions on how to make your very own Plankton Paper Roll to help you steal the Krabby Patty secret formula. Simply post the button below to your blog/socials so that your followers and their kids can create their own Plankton Paper Rolls!

The SpongeBob Musical: Live on Stage! DVD will be available for the suggested retail price of $10.99 U.S. Order your copy today on Amazon.

Do you love Plankton? Will you make this fun Plankton Paper Roll Craft with the kids?