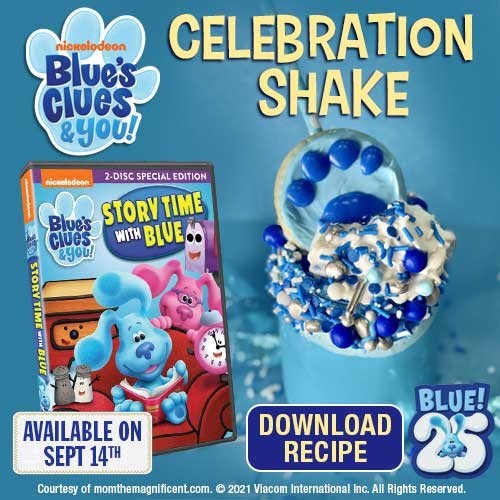 Can you believe that Blue’s Clues is 25 years old? Celebrates Blue’s anniversary with this Blue’s Clues Celebration Milkshake. It’s crazy to think that this fun and interactive kid’s show is as old as my daughter. Where has the time gone? This show makes me a bit nostalgic since my daughter is also turning 25 in December. Blue’s Clues was one of her favorite television shows to watch.

My daughter was both with a severe to profound hearing loss and she started learning sign language when she was about a year old. So when Steve introduced sign language into a Blue’s Clues episode, I was thrilled because not many television shows accommodate the hearing impaired or deaf community. Way to Go Blue’s Clues!

Do your kids love milkshakes? I haven’t met very many kids that haven’t enjoyed a bowl of ice cream or milkshake. In honor of celebrating Blue’s Clues 25th birthday, I wanted to share with you this fun celebration milkshake.

You will need to buy the following ingredients to make this fun celebration milkshake. Don’t have the glass jar on hand, we suggest these glass mason jars with lids and a straw (aff link).

After you have all your ingredients together, go ahead and make the sugar cookie mix according to the package. Once the cookies have cooled off, decorate the cookie with light blue icing. Then take the dark blue icing and create a paw print.

Directions on How to Make Blue’s Clues Celebration Milkshake

FOR THE FIRST TIME EVER, ENJOY EPISODES FROM BLUE’S CLUES & YOU!
AND THE ORIGINAL SERIES TOGETHER IN A 2-DISC SPECIAL EDITION DVD

Get ready to celebrate 25 years of Blue’s Clues with the special 2-disc DVD release of Blue’s Clues & You! Story Time with Blue! Available on September 14, 2021, this DVD is full of fun stories from Blue and her friends as they use their imagination, attend a pajama party, and discover Blue’s favorite part of bedtime. Also featuring a bonus disc with eight episodes from the original series, Blue’s Clues & You! Story Time with Blue will capture the hearts of both new and nostalgic fans of all ages!

Disc One – Blue’s Clues & You! Story Time with Blue:

This special 2-DVD set also includes Blue’s Biggest Stories in celebration of the 25th anniversary of Blue’s Clues! Steve and Joe join Blue and all of her friends for more stories!

Do you love Blue’s Clues? Are you going to celebrate Blue’s Clues 25th anniversary with this Celebration Milkshake?