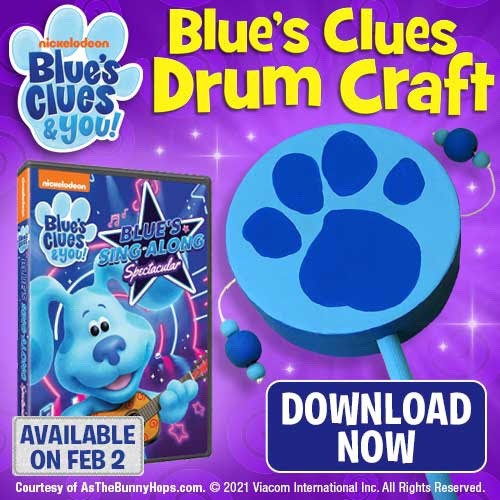 Are you looking for a fun craft to make with your Blue’s Clue fan? Blue has done it again and has a DIY Drum craft that your child. The DIY Drum craft with Blue was inspired by the new DVD that was released February 2, 2021.

Nickelodeon’s hit preschool series Blue’s Clues & You! is heading back onto DVD with four music-filled episodes in the all-new Blue’s Clues & You! Blue’s Sing-Along Spectacular. Available February 2, 2021, fans can join beloved puppy Blue and live-action host Josh (Josh Dela Cruz) as they play Blue’s Clues to learn about different musical instruments, put on a Blue’s Clues Music Concert, start a band and have a dance party. Blue’s Sing-Along Spectacular will have you putting your paws together for Blue, Magenta, The Mailtime Quartet, Slippery Soap, and surprise guest performer – singing sensation Ally Brooke!